September Presents Our Biggest Launch Ever with “Space Monster Wangmagwi”; PLUS Limited Time Releases of “Fauci (aka Jaws)” and “Abominations of Frankenstein” 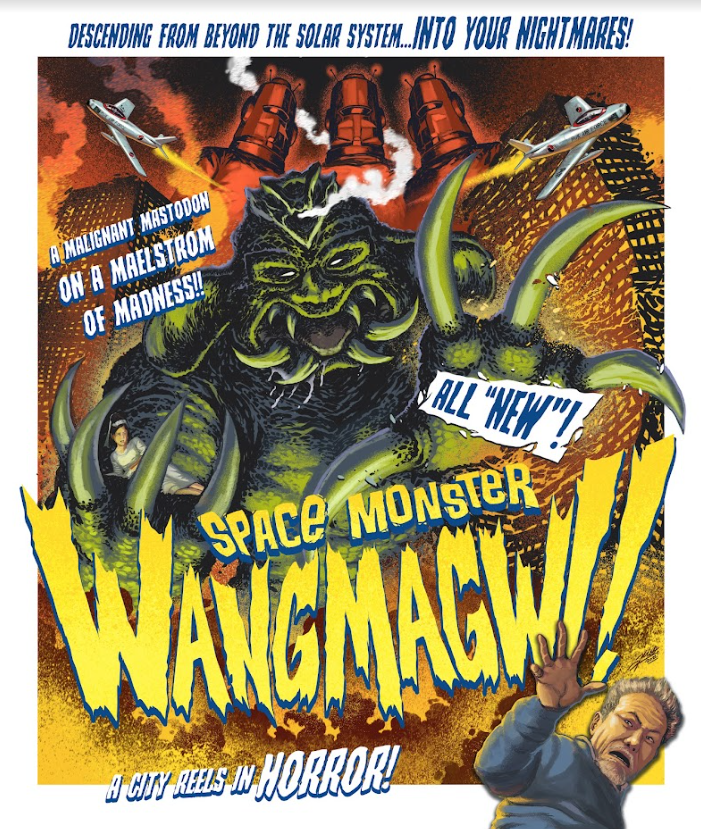 What an exciting launch we have for you this month, as we unleased the holy grail of kaiju collecting with “Space Monster Wangmagwi” on limited edition Blu-ray and VHS. We also do a bit of counter-programming, with limited two week pre-sales for “Abominations of Frankenstein” and “Fauci (aka Jaws”).

Please read on to the bottom for additional order info, but note that “Space Monster Wangmagwi” Blu-ray is limited to 2000 units, VHS to 50 units; “Frankenstein” and “Jaws” are limited to two weeks only with Pre-sales ending 10/13/22 – GET YOUR ORDERS IN EARLY!

These are PRE-ORDER titles – PRESALES START THURSDAY 9/29/22 and will show as sold out until then. Please note the expected shipping date of late Jan 2023. Then give us about 2 weeks after that to get all pre-orders in the mail. We will not be responding to inquires on order status until 2 weeks after the estimated ship date has passed. Thanks!

Aliens from another world seeking the conquest of Earth invade with flying saucers. They unleash a gigantic monster called Wangmagwi, who destroys everything in its path. The Air Force, led by ace pilot Ahn Hee, is dispatched, but can do little in such still heavily populated areas. Amidst the carnage, the Space Monster picks up Ahn Hee’s bride, Oh Jeong-hwan, carrying her along as it carries out the alien orders. However, when it tries to crush a young boy, named Spider, the kid evades the monster by scrambling up its arm and hitching a ride in the monster’s ear. He tortures it from within, cutting through its ear drum and, after finding a path to the nostrils, stabbing its inner nasal cavity. Eventually, Wangmagwi deploys a powerful death ray, melting entire buildings, forcing Ahn to finally take action. He executes a risky plan to save his bride and the kid, while hopefully stopping the beast once and for all.

“Space Monster Wangmagwi” is a 1967 South Korean kaiju film. It was the second giant monster film to be made in South Korea (and first feature length one). A holy grail among kaiju fans, it was long thought to be lost until an original print emerged out of the blue a few years ago. It is being released on physical media for the FIRST time EVER – anywhere in the world – thanks to SRS Cinema.

The Abominations of Frankenstein
Blu-ray

After centuries of unnaturally prolonging their lives, the mad Baron Von Frankenstein (Anthony D.P. Mann) and his murderous assistant (Vicki Bitis) have begun working on a new monstrous experiment. Haunted by his past and determined to bring his nightmarish vision to reality, Frankenstein crafts a new abomination, stitch by stitch. When the new Creature (Sébastien Godin) escapes, the world is once again faced with the horrors of Frankenstein! Luridly colorful and frequently bizarre, THE ABOMINATIONS OF FRANKENSTEIN is an all-new take on horror’s most infamous monster…and his creation!

Two episodes in which the protagonists fall into the jaws of madness! In the first, a serial killer, who has escaped from the asylum, wants to take revenge on the woman who betrayed him; in the second a girl is being persecuted by someone, while around her people are being killed by a madman. From the dark mind of Fabrizio Spurio.

-PLEASE note the expected shipping estimate before emailing us about the status of your order.
-COMBO order save money but will not ship until all items are in stock.
-PRE-ORDERS can NOT be cancelled once placed due to our fulfillment system.
-PLEASE NOTE in case of defective discs, mis-shipments or for any reason, we may need the original item back to issue a replacement. You, the buyer, agree to return the item if we request – at our cost – in order to get a replacement.
-POSTERS when applicable are provided free of charge. They are not replaced due to damage or if missing. They can run out without warning. Poster is shipped folded with the media, however you can get it sent rolled in a tube (or shipped rolled in a large box at our discretion) by selecting it from the drop down menu.

Pre-sales start Thursday 9/29/22 7pm EST and will show as sold out until then. Copies are expected to ship around late Jan 2023. “Space Monster Wangmagwi” is on professionally pressed BD’s, and is limited to 2000 units ever. “Frankenstein” and “Jaws” are on professionally run BD-R’s are limited to two weeks of pre-sales only.